Goal Zero Yeti 1250, as you know, is the flagship model of the company’s old-gen power stations. Of course, a Goal Zero Yeti 1250 solar generator kit with a reliable solar charger is an amazing choice for outdoor enthusiasts and emergency preppers.

Interestingly, Yeti 1250 is still available on the market even after Goal Zero upgraded the Yeti series with the new lightweight and long-lasting lithium-based models.  The lovely thing with Yeti 1250 is that it is somewhat cheaper than its counterpart in the new Yeti line-up, Yeti 1400 Lithium.

But remember Yeti 1400 is more powerful than its predecessor. However, Goal Zero also added yet another model to the new series, Yeti 1000 Lithium to compete with Yeti 1250.

Here we have Goal Zero Yeti 1250 kit with the Boulder 100 Briefcase solar charger for a review. As you know, Goal Zero was earlier selling this Yeti with multiple old-gen Boulder 30 solar panels.

After the release of the new foldable Boulder solar panels, you would better buy Yeti 1250 with a unit of Boulder 100 Briefcase. Sure, that will make the system rather friendly for outdoors.

However, you could also try out the low-end Boulder 50, but that wouldn’t be charging your power station as fast as Boulder 100 or the more powerful Boulder 200 Briefcase.

Why should you buy Goal Zero Yeti 1250 solar generator kit? Simply, it is one of the most powerful solar power stations you could find on the market with a lead-acid battery inside. There is indeed a more powerful Yeti 1400 Lithium with more lightweight features, but Yeti 1250 comes cheaper.

Fine, we have more details of Yeti 1250 and the included Boulder 100 Briefcase solar charger after the break. Meanwhile, you could check out its latest price on the link below and buy a unit of Yeti 1250. Currently, it is not available in a bundle with Boulder 100, so you could buy it separately. 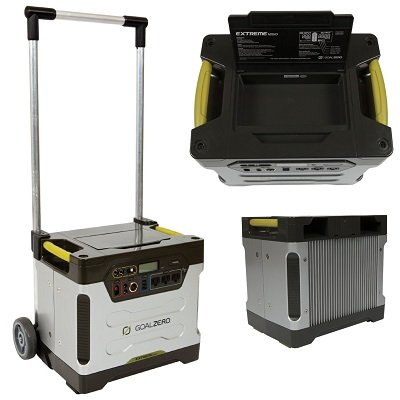 Specs-wise, it is a 1250Wh portable power station with a battery of 100Ah at 12V. With ten charging outlets, you could use it to power up as many devices comfortably at the same time. Fine, the built-in 1200W pure sine wave power inverter with a surge capacity of 1500 watts makes it a perfect pick for most of your AC appliances.

Coming to charging options, it touts multiple outlets including three AC sockets. Further, it equips four 2.1A USB ports and two DC outlets to support all your USB and DC-powered electronics. That really makes it a versatile power station for your phones, tablets, appliances, lights, and more.

The recommended solar charger for Yeti 1250 is a unit of Goal Zero’s new Boulder 100 Briefcase, as put it above. Specs-wise, this is a pair of 50W Boulder 50 solar panels attached together in the form of a briefcase. So, you get two times more power and a brilliantly easy-to-carry solar charger.

You could also use Boulder 50 or Boulder 200 Briefcase solar chargers with Yeti 1250. Obviously, the former will be taking more time to recharge the powerful device. Meantime, if you would afford Boulder 200 Briefcase, it would be a rather faster way to juice it up from the sun.

Anyway, check out the latest price of Boulder 100 Briefcase on the link below. You could also buy the other Boulder variants on the link, by the way. 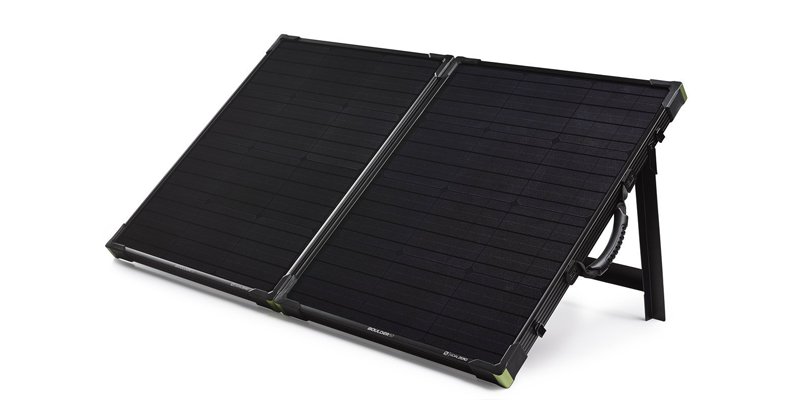 Boulder 100 is a 100W monocrystalline solar panel with a briefcase design. You could comfortably carry it on its built-in durable handle. And store neatly in the included carrying case after the use taking up a small room. The integrated kickstands help place the panel rightly under the sun.

Made with rigid, anodized aluminum frame and tempered glass, it is surely a reliable solar charger for outdoor applications. You could use it ideally in various off-grid, camping, and emergency situations with no worry. Goal Zero offers a 1-year limited warranty for the same, above all.

Why Should You Buy?

For a relatively cheaper price, you get a kit of essential things required to make a good amount of power outdoors. As noted above, the Goal Zero Yeti 1250 solar generator kit comes with a unit of Yeti 1250 and a Boulder 100 Briefcase. In total, this kit becomes a nice solution for all your on-the-move solar power requirements as well as in an emergency.

Goal Zero Yeti 1250 is one of the market’s most powerful solar power generators. You have it as the top-end variant of the old Yeti series. As you can know, the machine can deliver 1250-watt-hours of power, which is quite enough to power up an array of your power-savoring devices like lights, tools, freezers, medical equipment, and more.

Apart from the bundled Boulder 100 Briefcase, you could add extra solar panels to make charging rather faster under the sun. That is the coolest way you could make it more friendly for RV, camper, trailer, or boat. Also, in an emergency, it is always nice to have better solar charging speeds as you would need a lot of power to survive the critical conditions.

Alone, Yeti 1250 is indeed a power station. It becomes a solar generator only when you attach it with a solar charger. Or you could use either a carport or wall socket to recharge it. So, if there is a cloudy day, you could always ensure enough power. However, as a Goal Zero Yeti 1250 solar generator kit, you get it with the required solar charger, and so you can use all the options to charge it.

Why Shouldn’t You Buy?

If you are looking to buy a lightweight solar power solution, Yeti 1250 is not for you. Even the band’s new Yeti 1400 Lithium weighs just below half of Yeti 1250’s. What’s more, you get the new lithium counterpart with more power, battery capacity, and charging cycles.

However, coming to the price, there is no big difference in between. As of now, Goal Zero Yeti 1250 solar generator kit with Boulder 100 BC is around $300 cheaper than the same kit of Yeti 1400.

Hope you have enjoyed our take on the flagship Goal Zero power station. Well, Goal Zero Yeti 1250 solar generator kit is really a worthy pick for all kinds of users, who look for alternative energy for both camping or emergency conditions alike. Also, you can buy this solar generator kit to set up an extra power source in your home in case of power failures.

There still looks to have a good number of customers for Yeti 1250 on the market. You can use it to set up a complete off-grid solar solution in your RV, camper, trailer, houseboat, or remote cabin. Certainly, Goal Zero Yeti 1250 solar generator kit with Boulder 100 BC is a great way you can charge your off-grid and emergency life. Share your thoughts about the product in comments below.