Following its much-touted 372Wh solar generator, AllPowers has unveiled a new model on Indeigogo for a crowdfunding campaign. Codenamed Monster X, the AllPowers 1287Wh portable power station is indeed an incredible product. This is going to be the top-tier model of the AllPowers solar power stations.

AllPowers Monster X is really a powerful battery power station. It could output 2000 watts and it packs up a massive 1278Wh, 345600mAh lithium battery. That said, the new AllPowers looks to take on the biggies like Goal Zero Yeti 1000 Lithium, Jackery Explorer 1000, and EcoFlow Delta power station.

Like its low-end model, Monster X is performing quite well in crowdfunding. So far, the AllPowers 1287Wh portable power station has managed to amass up as much as $265,900 from around 350 backers with 17 more days to go for the campaign to end. That is a whopping 2648% of the flexible goal of $10,036.

Well, one year back, its 372Wh variant – codenamed Monster – could gather up a massive amount from the backers. Here we have all to know about the new AllPowers power station.

Monster X is indeed a powerful and revolutionary battery power generator. It could run anything you could imagine from a laptop, power tool, and fridge to or even a Tesla. That is how AllPowers has envisaged the top-end model of its solar power stations. Overall, it could run or charge up to 11 devices at the same time.

Specs-wise, the AllPowers 1287Wh portable power station features an ‘extremely dependable’ 3C high-rate lithium battery, which could offer high storage capacity compared to other models of the same size. It could ensure recharge cycles of up to 3000 times. Check out the link below to preorder a unit of the product. 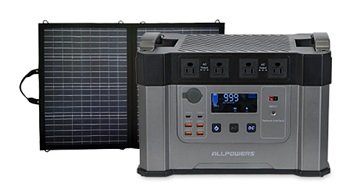 AllPowers Monster X sports a variety of charging outlets. Most notably, they include four standard full-size AC outlets. Of which, each could output 2000 watts power with a surge capacity of 3300 watts.

In addition to the AC sockets, it integrates two units of USB-A, USB-A 3.0 Quick Charging, and USB Type-C Power Delivery ports each. There is also a 120W 12V carport on the AllPowers power station.

Like all similar power stations, you could recharge it via three options. They are 200W DC port, regular AC socket, or solar input. The ideal solar input for the machine is 200W. That said, a pair of 100W solar panels or a large 200W panel will be enough to top it up in the wild to ensure unlimited off-grid power.

Of course, there are several special things with the AllPowers 1287Wh portable power station. Every new product comes with a bunch of specialties. We have already checked out the main specs of the AllPowers device. Below we would like to peek through the unique features of the product. Stay tuned.

With a 1278Wh, 345.6Ah battery, it is capable of running most of your essential home appliances. Whether it is a coffee maker, electric saw, fridge, or ice cooler, you could run it smoothly by connecting to AllPowers Monster X. It has got an ideal backup capacity for an outdoor adventure or an emergency situation.

It is a notable feature AllPowers has been showing off with much importance. Of course, the high storage capacity of Monster X makes it power up your electric car up to 7.5 extra miles on a full charge. That means, in case of an emergency power drain, you could rely on the machine for a further drive.

To make it perfect for rough outdoors, it has got a very strong and rigid battery and structure. The maker has used aluminum alloy structure to reinforce the battery. It also gets further protection from ABS+PC materials. Overall, you have nothing to worry about its durability in use in rough outdoor conditions.

That has been our take on AllPowers 1287Wh portable power station. The device is currently available for pre-order on Indiegogo. Of course, it is up with a variety of offers along with a 100W folding solar charger. The brand looks to start shipping it by June 2020. Soon after, it will also be hitting the public market. Share your thoughts about the product in the comments.