AllPowers 372Wh Solar Generator: Everything to Know About the Smart and Compact Power Station with Qi Wireless Charging

AllPowers is a brilliant vendor of portable solar power systems. It sells a line of stylish solar power stations across the world. Here we would like to explore the much-touted AllPowers 372Wh solar generator. That is an incredible product with a host of lovely features for both outdoor and emergency users.

The AllPowers machine is actually a serious threat to Goal Zero Yeti 400 lithium, Ecoflow River, and several other leading camping solar power stations. AllPowers brought this to reality through a highly successful crowdfunding campaign on Indiegogo. We have more details of the AllPowers solar generator below.

The AllPowers power station is very handy and competes with Yeti 400 Lithium in several aspects. Though less in power and output compared to Yeti, it is a well-engineered and full-fledged power station. Also, as its maker claims, it is one of the first portable power stations to introduce wireless charging facility.

Similarly, the AllPowers highlights a built-in Bluetooth chip to let you control the machine wirelessly via a mobile app. The same feature is available with the high-end Yeti 1400 and Yeti 3000 only.

By the way, with multiple charging ports, you could use it to support nearly all of your essential electronics in the wild or in an emergency. Its stylish form factor and a stronger and longer carry handle are two other notable things. Check out the latest price of the machine on the link below. 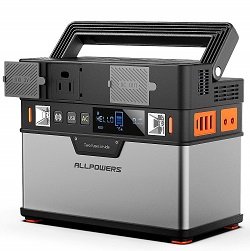 Specs-wise, it is a 372Wh (100,500mAh) power station that could juice an iPhone around 40 times and run a smaller 20L fridge 12 hours. The integrated output ports include a pair of AC sockets, three fast-charging USBs, a 60W Power Delivery port, two DC sockets, and finally the much-touted Qi wireless charger.

Above all, it features a pair of LED lights, making it a really cool camper or emergency solution. It packs up a pure sine wave inverter with a surge capacity of 300 watts. That is quite enough to power the dual AC sockets it carries. So, out in the wild, you could comfortably run emergency AC appliances on it.

That is, in fact, a high-end variant of the brand’s folding solar panels. Specs-wise, it is a 100W solar charger with as many as 15 arrays of small mono solar arrays. Hence, you could fold them down to a smaller and backpack-friendly unit. Check out the button below to order a unit of the AllPowers solar charger.

This is actually a 3-in-1 solar charger that features dual USB ports and a DC socket. So, apart from helping back up the power station, it could directly charge your handsets or any USB-based gadgets just under the sun. Thanks to the integrated iSolar technology, it could offer a safe flow of the current to your electronics.

As its maker claims, it is an advanced solar generator. Once connected to a solar panel up to 100W, it could store a good amount of energy from the sun. So, you could back up the green power during camping or an emergency and use it later. As put it above, AllPowers 372Wh solar generator has many advanced features like Bluetooth connectivity, wireless charging, and a stylish design.

2. Big Challenger to All the Rivaling Products

The AllPowers 372Wh solar generator is indeed a big threat to all its competitors. In its segment, we have a wide variety of power stations. Goal Zero Yeti 400 Lithium, EcoFlow River, Suaoki 400Wh power station, Anker Powerhouse 400, Jackery Explorer 240 are only a few to name. The new AllPowers device is surely a big contender to all, thanks to the state-of-the-art features and a compact profile.

The AllPowers is, of course, a brilliantly powerful solar power solution of its class. Coming to specs, it packs up a 100,500mAh high-capacity battery that could offer 372 watts hours of power. That is enough to run a 55-in LCD for around 3 hours and a lot of other devices for pretty long hours.

So, you could rely on its backup to run most of your essential household appliances, camping gear, and more in an emergency. It has got dual AC sockets and a range of other outlets for all devices.

Further, the device becomes an ideal camper and emergency companion with its integration of three LED lights. Moreover, you have separate switches for the LED lights, AC and DC ports, and the wireless charger. So it comes out to be very cool to manage various ports and the LEDs.

Above all, the AllPowers is very handy and lightweight. It is smaller and lighter compared to both Goal Zero Yeti 400 Lithium and EcoFlow River power station. Clearly, it weighs just 8.6 lbs and it has got the size of 6.7 x 4.3 x 8.1 in. Apart from that, its highly portable design with a durable handle, you could easily take the machine anywhere with no much hassle. 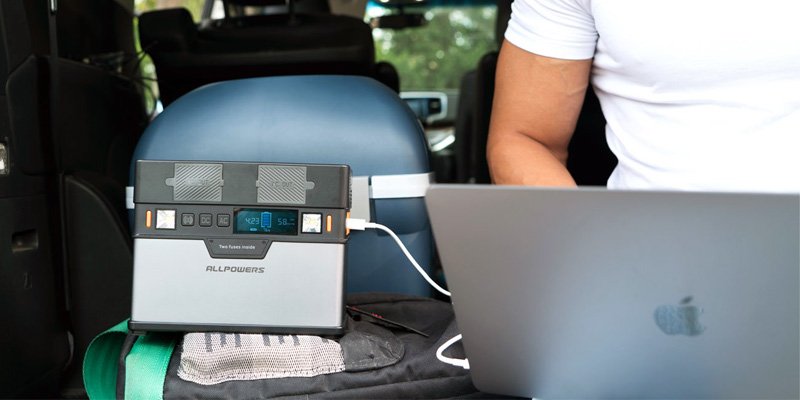 That has been our take on the new AllPowers 372Wh solar generator. As said above, it is a modern, simple, and pleasing power station with a number of incredible features. Compared to most of its rivaling models, it clearly has an edge in several aspects.

If you are looking for a reliable portable solar power solution, it becomes a really good choice, for sure. Its stylish and ultra-portable design along with the features make it one of the best of its kind on the market. Share your thoughts about the product in the comments below.

Check Out all the AllPowers Portable Solar Generators Here