EcoFlow has been boasting this line of high-capacity power stations as the world’s strongest battery-based power generators. Though the name ‘battery generator’ is a clear misnomer, the brand calls it so because what you get is a power station that supports power generation with a solar panel.

That is how the company shows off the new EcoFlow Delta portable battery generator as some great alternative to even the traditional gas generators. Of course, you could use the completely noise-free solar-enabled power generators both indoors and outdoors safely.

The EcoFlow battery generator has been receiving extensive attention since the company started to talk about it some weeks ago. As of now, EcoFlow has just unveiled the new product on a Kickstarter campaign, where you could pre-book both the variants, which are expected for delivery this fall.

The Kickstarter campaign has so far attracted a lot of backers, thanks to the brand’s long and highly successful marketing efforts. As of now, it has already attracted as much as $828,834 from around 900 backers with 43 days to go. That would certainly be a record-breaking performance, for sure.

Along with an EcoFlow solar charger, both the variants of the EcoFlow Delta would be some ideal solar generators. Of course, they would come out to be severe competitors to Goal Zero’s flagship Yeti 1400 Lithium and Yeti 1000 Lithium.

Most notably, the new EcoFlow devices are known for their number of charging options. They both carry 13 output ports to support a large number of your electronics. Plus, they have lightweight and handy designs, making them ideal for all your outdoor and emergency power needs.

Here we would like to have a look at the basic specs of the EcoFlow Delta portable battery generator solutions. Well, Delta 1300, as its name suggests, is a 1300Wh power station. Meanwhile, its lighter variant, Delta 1000 is a 1036Wh unit, which is certainly more affordable.

Both variants have the same design attributes and charging ports. They only stand out in the overall capacity and inverter power. The higher-end model has got an 1800-watt inverter, which could peak at 3300W. Meanwhile, its younger variant packs up a 1600W inverter with a surge power of 3100W.

EcoFlow has been known for its series of lightweight River power stations. It is when the brand has come up with the new variants that are even bigger-ass battery packs. That certainly makes the new EcoFlow Delta devices powerful enough to run a variety of electronics.

Coming from EcoFlow, there is nothing surprising to see such an amazing number of charging ports on both the devices. The brand’s former River power stations are also known for more number of charging options compared to their rivaling models.

However, to your surprise, both the new Delta solar power stations equip as many as six AC sockets, including four 220-240V international units.

One 12V DC car charger is also there to take the overall count to an unparalleled 13 ports.  You could use all the charging outlets at the same time to power up all your electronics with both the EcoFlow Delta portable battery generator variants.

Where to Buy From

The EcoFlow Delta portable battery generator is currently available for pre-order on Kickstarter at reasonable prices and with some nice perks. 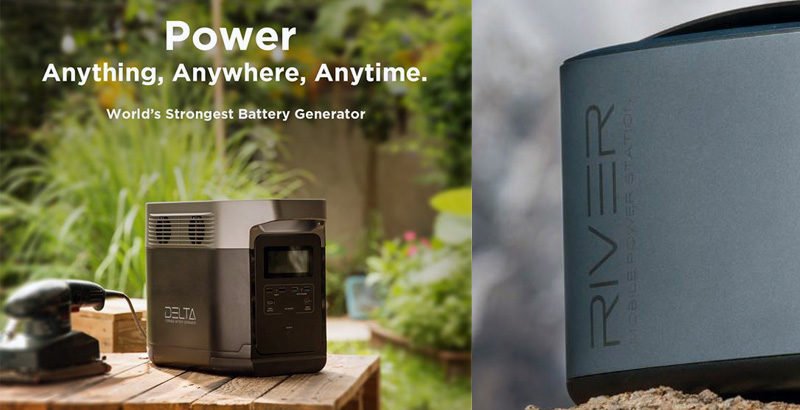 What special things are to make the EcoFlow Delta portable battery generator unique? EcoFlow has given us a glimpse at some of its notable features. Let us check out them in detail below. By the way, we will come with a complete note on its features once the device is launched after two months.

Yes, as with any portable solar power solutions, Delta is going to save you from burning gasoline out in the wild. It would secure both your pocket and the environment. See, the gasoline generators are always expensive, noisy and severely contaminative to our surroundings.

Moreover, as per EcoFlow, Delta power station will be more lightweight and compact compared to most of the gas generators out there. So, we are to get a brilliantly eco-friendly solar power station.

EcoFlow Delta portable battery generator ensures quick recharging via both a wall outlet and a solar panel. The brand’s patented X-Stream charging technology helps recharge it from a wall outlet from 0 to 80% in just an hour. Meanwhile, with a solar panel, you could recharge it in around four hours under optimal conditions.

3. Safe for Use Indoors.

Of course, being a battery-powered generator, the Delta works safely inside your home or office. A gas generator emits fatal carbon monoxide, making it never good for indoors. Meanwhile, during a blackout or an emergency situation, you could safely use the EcoFlow Delta generator indoors and enjoy unlimited off-grid power along with a solar charger.

Like all similar products, EcoFlow Delta portable battery generator is going to be a great companion for the outdoorsmen. You could take the lightweight power station anywhere on the move. And use to power up your electronics off-the-grid with no limit if you have it connected to a solar charger.

Though EcoFlow was earlier talking about only a single 1800W variant, we were lucky to receive an affordable variant to it on its Kickstarter release. Called Delta 1000, it is a 1600-watt solar battery generator as said above. That is certainly available at a cheaper price but has got the same number of ports and other features, except for the battery, which is a lighter 1036Wh unit.

By the way, let us have a sneak peek at the former variant of EcoFlow’s solar power station. Surely, the brand has been selling this product for a while. That is a 370Wh power station with an output of 500 watts. That said you could comfortably run your gears under 500 watts using it.

The upcoming EcoFlow Delta portable battery generator is certainly going to be a big brother to this model. It is already one of the top-seller portable solar power generators on the market with a good number of takers. Check out the button below to see its latest price and buy a unit if you love it.

It is really a smart product of its kind. This has got many advanced charging options. It features the brand’s much-touted bidirectional inverter technology. That will facilitate the included 60W USB-C Power Delivery (PD) ports to quickly and safely charge and discharge.

Moreover, the machine has got as many as nine charging output ports. They include two AC sockets that could output 300 watts and 600 watts surge. Furthermore, it sports two Power Delivery USB-C ports, as many USB Quick Charge ports and regular USB ports, and more.

When it comes to the suitable solar charger,

EcoFlow offers an awesome 85W folding solar charger. That is made of highly-efficient mono solar cells. The charger is also suitable for the brand’s other popular power station, called the EcoFlow 412Wh power station. Maybe, it will be working with the new EcoFlow Delta as well. Check out its latest price on the link above.

As you see, this is another outstanding solar power station from EcoFlow. It is a 412Wh portable power station with the solar charging compatibility. Featuring a 500W power inverter, it could be an ideal choice to run most of your emergency appliances and gadgets.

Inside, this variant of EcoFlow River packs up a 114,000mAh battery. That would ensure you 100% safe portable power to run your electronics off-the-grid or in an emergency. For ideal usage in both cases, you should buy the River power station along with a suitable solar charger.

Coming to the charging ports, this River variant is a wonder, of course. This shows off as many as 11 charging options. They include four USB ports with two of them being Quick Charge solutions and two USB-C ports. Apart from that, the power station sports two DC outlets and as many AC sockets to power up a variety of your electronics.

EcoFlow has introduced it as a perfect portable solar generator. However, you could also employ it as an emergency back-up solution in your home or worksite. Along with a reliable solar charger, you could ensure unlimited off-grid power with a unit of EcoFlow River 412Wh power station.

Well, the portable solar power market is about to get yet another awesome machine from EcoFlow. The EcoFlow Delta portable battery generator, expected for September 2019 release, looks to be a big threat to Goal Zero’s flagship Yeti 1400 Lithium. With the available information, Delta seems to be as powerful and handy as the Yeti machine.

But let us wait two more months to check out how the new EcoFlower portable power station would turn out to be. Share your thoughts about the upcoming power station below in the comments.