The American firm, which missed out to upgrade its entry-level Yeti 150 with a lithium model, has resolved the shortage with the new model. That is Goal Zero Yeti 200X. Like the brand’s large Yeti line-up, it is also a solar-based portable power station with some incredible features.

The new Yeti is indeed an ultra-compact power station. Campers and other outdoor enthusiasts could take it easy on the go. It notably features fast-charging technology. That will help you quickly recharge it from a wall socket or a carport other than the solar panel, which you need to buy separately.

By the way, Goal Zero Yeti 200X portable power station is currently available on REI and Goal Zero. It would be available on Amazon and other retail sites by early 2020 only. Anyway, we would like to have a detailed look into the new Yeti 200X below. Stay tuned after the break.

Coming to specs, this is a 187Wh power station with a 13Ah @ 14.4V Li-ion MNC battery. The AC inverter delivers 120W modified sine wave output with surge protection of 200 watts.

Well, that is how the new Goal Zero Yeti 200X portable power station is a serious competitor to a series of power stations in the range. They notably include Suaoki 200Wh, Jackery Explorer 160, and more. In other words, we could argue that Goal Zero has deliberately posited it as a challenger in the low-end market.

Check out the link below to buy a unit of the product at Amazon.com. 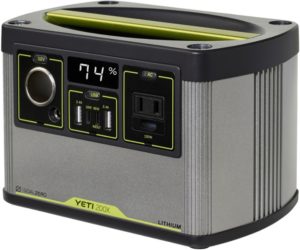 Coming to other charging options, the new Goal Zero Yeti has a USB-A, USB-C, and USB-C Power Delivery ports. Plus, it integrates a 12V car and a 6mm DC outlets. Overall, it highlights all the important charging options to power up your basic electronics and appliances on the go.

Also, as said above, you could recharge it in three ways. When it comes to the solar charger, the integrated MPPT charge controller makes it steady faster. Any of the Goal Zero solar panels will work with it.

Goal Zero has not introduced any new solar charger for Yeti 200X or other Yeti X power stations. Still, the famous Boulder series is the fine choice to get the power station powered under the sun.

As you know, you have the Boulder series available in multiple variants of folding as well as non-folding options. Here we recommend Boulder 100 Briefcase for Yeti 200X.

The foldable solar is easy to manage in the wild. You could just fold it down to a briefcase form, which has got a strong carrying handle for moving. Meanwhile, once spread out, it is easy to place it over the built-in solid kickstands at a perfect angle to grab sunlight. Check out the link below to refer to its latest price.

Like all Goal Zero products, this is a well-engineered one. Made of high-quality mono solar cells, you get a really awesome solar charger for camping, emergency, and off-grid living conditions. Indeed, it would be a nice experience for outdoor enthusiasts to deal with the Boulder solar charger in the wild.

By the way, you could also try out other variants of Boulder including the non-folding traditional Boulder 50 or Boulder 100. They are respectively single-panel 50W and 100W mono solar panels. Above all, you have a 200W high-power Boulder 200 Briefcase that could charge Yeti 200X rather quickly.

With the new Goal Zero Yeti 200X portable power station, the Goal Zero Yeti series has got an entry-level base model. Up to now, Yeti 400 Lithium was the entry-level variant, which is priced over $500. Goal Zero didn’t come up with a lithium upgrade to its Yeti 150 lead-acid model. Here we have it in the form of 200X.

Yes, the new Goal Zero Yeti has a lithium battery, as said above. That is a fast-charging one. You could fully charge it in just four hours via a wall socket. And with a Boulder 100 solar charger, you could charge it in a few hours under the sunlight, thanks to the fast-charging MPPT charge controller.

Though a smaller and compact power station, Yeti 200X is enough to back up most of your regularly used electronics. You have it with multiple charging options including USB-C port to power a range of devices at ease. It could power up an LED light for up to 180 hours and charge a lap for more than four times.

Of course, as an entry-level model, Goal Zero Yeti 200X portable power station is a very much compact and lightweight device. It has a size of 7.9 x 5.1 x 5.1 inches and it weighs just 5 lbs.

It is also a solar-based power station like the entire Goal Zero Yeti series. You could use any of Goal Zero’s solar panels to recharge it from the sun and make your off-grid and emergency life connected.

That has been our take on the new Goal Zero Yeti 200X portable power station. The American brand has crafted it as a perfect portable power solution for you away from home. Going on an adventure, you could use it to ensure power when and where you needed it crucially, said Bill Herman, the GM of Goal Zero.

Of course, a lighter version of Yeti was the need of the hour. When most of the brands in the industry had been offering cool entry-level models, Goal Zero was really missing it. Goal Zero fans would have to either go for the old-gen Yeti 150 or Yeti 400 Lithium, which is pricier and is also a not-much-friendly-camper-device. Anyway, share your thoughts about the product in the comments below.