As of writing this article, two base models of the line have already hit the stores. They are 200X and 500X. Maybe, the brand will be launching the other variants throughout the year. Anyway, we would like to have a detailed look at the released models and to explore the available specs of the rest.

Well, as Yeti 200X being the entry-level variant, the new series has a huge Yeti 6000X on the other end of the spectrum. With that said, Goal Zero has added up two new variants at both ends of its current line-up. Clearly, they are an entry-level 200X and a top-ender 6000X. Thus, there is a total of six models.

Goal Zero is yet to reveal full specs of the devices, except for Yeti 200X and 500X. But the model numbers are clear indicators of each model’s storage capacity in watt-hours. We are not certain if they will get new branding once released. The currently available models carry the codenames on retail sites, though.

Still, we have Yeti 6000X as a brand-new entry into the line. Being “the most powerful Yeti to date,” Yeti 6000X could power up critical home circuits for longer days. That would be carrying multiple AC sockets that could run your emergency AC appliances exactly the same way they do from wall sockets.

Goal Zero has given a hint to the inclusion of its new 2000W AC inverter in all the large models of the new Yeti series, starting from Yeti 1500X. That is, the products would be replacing the existing 1500W inverter. Therefore, you are lucky enough to get more sophisticated power systems to run most of your appliances.

In the meantime, the advanced fast-charging USB-C ports help you quickly charge your USB-C compatible handsets and other gadgets. Well, the new-gen of laptops and other devices feature USB-C outlets.

Similarly, there will be regulated 12V DC sockets on the new Goal Zero Yeti X devices. They are expected to ensure improved compatibility with devices like portable refrigerators and more. 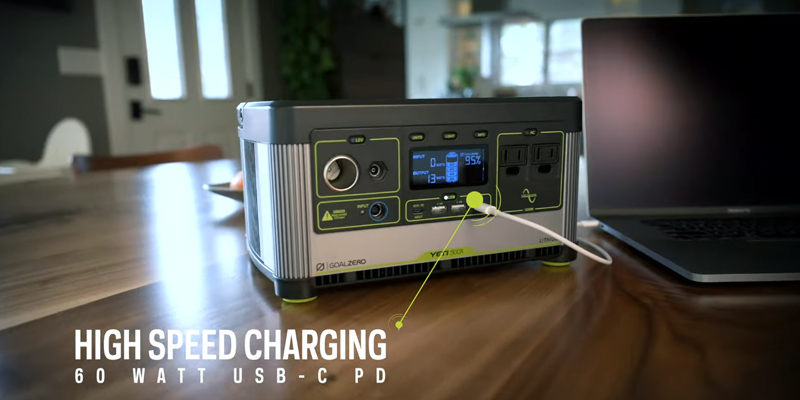 First, it highlights an option for tracking historical power data. Well, that will help users track energy inflow and outflow data for a period of time. Thus, you could analyze the data for the past days, weeks, months, years, and so on. Of course, it makes you perfectly monitor the operation of your power station.

Further, the new app helps you set personalized charging profiles. That is, you could customize your profile with different options and modes to help optimize battery life. With this, you could set a discharge level, a maximum charging level, and more. These settings will surely increase the life of your Yeti.

Here comes Goal Zero Yeti 200X. It is a model that the brand has been featuring on various retail sites long before the official launch of Goal Zero Yeti X power stations. As you see, it looks like a spectacular upgrade to the much-touted entry-level variant of its first-generation Yeti series, Yeti 150.

Of course, Yeti 150 was, unfortunately, missing an upgrade in the second-gen Yeti series. Goal Zero has met the shortage with this incredible lite and handy portable power station. Perhaps, it might be because Goal Zero started selling it a bit earlier than the other models in the line-up.

Anyway, here we would like to rip through the model to see how it works for you in an off-grid or survival situation. Check out its price on the link below and buy a unit for a new Yeti experience. 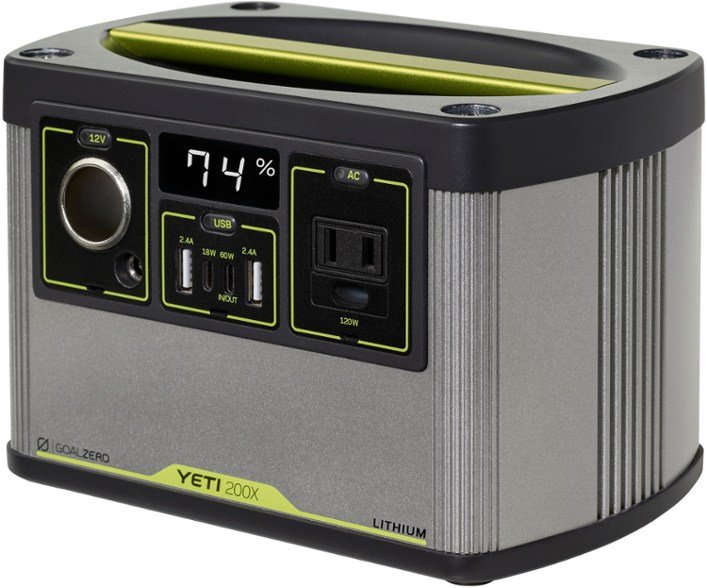 Coming to specs, Yeti 200X is a compact 187Wh solar lithium power station. It packs a 13Ah @ 14.4V best-quality lithium battery that you could rely on for unlimited off-grid power along with a solar charger. The inverter inside is a 120W continuous modified sine wave unit with a surge capacity of 200 watts.

So, through the included AC socket, you could run an essential small AC appliance up to 120W smoothly. At the same time, you could use it to juice up multiple USB and DC devices. For that, it has got dual 2.4A USB ports, one USB-C, and one USB-PD @ 18W port. There is also a 120W DC port and an interactive screen.

Overall, what you get is a small and lite power station that could run most of your phones, tablets, laptops, GPS units, and etc. You could power it up from an AC socket or carport apart from a solar panel. The device has a weight of 5 lbs and a size of 10.6 x 9.5 x 9.5 inches, by the way.

As you know, Goal Zero has own solar chargers for its power stations. Though the brand has not released dedicated solar panels for the new Yeti X series, the current Boulder and Nomad chargers work with them too. So for this entry-level Yeti 200X, we would like to recommend the 50W Nomad 50 solar charger.

Obviously, Nomad is a fabric-based folding solar charger series. It would be easy for you to carry it along and deal with it in the wild compared to a metal-and-glass Boulder. Nomad 50 is actually an 18-22V solar charger that comes with a built-in 8mm charging cable and a USB port. Check out its latest price below.

Well, using the 8mm cable, you could power a Yeti 200X or any other power stations. Meanwhile, the USB cable lets you charge your USB-based devices right under the sun. That said, you could use Nomad 50 as a regular USB solar phone charger when not connected to a Yeti or simultaneously.

Made with four layers of highly efficient mono solar panels, it could offer you a higher output. Once folded down, it features a very small and compact profile so that you could carry it anywhere easily. The charger has a weight of around 7 lbs and a size of 17 x 11.25 x 2.5 inches once folded down.

Next, we have the 505Wh variant of the Goal Zero Yeti X power stations. After Yeti 200X, this is the next model that is available for sale as of now. Goal Zero started selling the product, an upgrade to the former Yeti 400 Lithium, in two months after its official launch at CES 2020.

Compared to its predecessor, Yeti 500X is 20% smaller but is capable of storing 20% more power than Yeti 400. That makes it a more perfect pick for camping trips and backyard parties. It could perfectly keep your small to medium electronics charged. Check out its latest price below. 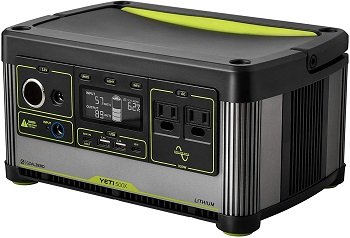 Specs-wise, the Yeti power station integrates an NMC lithium battery of 46.8Ah @ 10.8V. And the power inverter is a 300-watt pure sine wave unit that could peak at 1200 watts. You could draw the AC power through its two standard AC sockets to run your appliances under 300 watts neatly.

The other charging points include two USB-A outlets and single units of USB-C PD and USB-C. There are also one 12V DC socket and one 6mm 12V port to support a variety of your DC-based gadgets. Overall, the machine could run most of your essential electronics out in the wild or in a survival situation.

Design-wise, it just follows the attributes of its younger sibling, Yeti 200X. But it is rather lightweight and compact compared to its former variant. It weighs just 12.9 lbs and you could take it anywhere on your trips by carrying on its handy handle. It has a size of 7.5 x 11.25 x 5.8 inches, by the way.

Any of the Goal Zero Boulder solar panels really work with Yeti 500X. You have two options to go with the Boulder series; foldable briefcase panels and the regular single-sheet panels. If you for the first group, that would be the proper choice for outdoor and portable power needs.

Therefore, we would like to recommend you get a 100W Boulder 100 Briefcase. That is simply a suitcase-style solar charger built with a pair of 50W Boulder panels hinged together. It features heavy-duty latches, a solid carrying handle, and kickstands. Check out its latest price below.

Thanks to kickstands, you could position it anywhere to grab as much solar energy as possible. Meanwhile, after the use, you could simply fold the solar lids down and comfortably carry on its handle. The solar panel is indeed built-with anodized aluminum frames and the tempered glass for better durability and life.

Besides the briefcase variant, Goal Zero offers two regular panels as well, They are 50W and 100W models. They also integrate kickstands to let you place them quickly right anywhere. But if you would like to use Yeti 500X for portable needs, the best choice is absolutely a briefcase variant.

Anyway, it is a great time for all outdoor enthusiasts, emergency preppers, campers, RVers, and more. You are lucky enough to get a series of new awesome solar-based power stations from the famous American brand. Stay tuned with us to get complete notes on all the new Goal Zero products on the days to come.