People are more passionate about RVing and camping these days. There is indeed a striking rise in the number of people who would like to make into various adventurous trips. Well, the easiest way to assure portable power in such off-grid situations is a solar generator kit for RV and trailers.

Of course, a solar generator could make your life outdoors rather delightful and enjoyable as you get a good source of alternative energy in your vehicle. Obviously, you could sleep under the skies with all your devices running and enjoying the outdoor explorations.

What do you think is the best solar generator kit for RV and trailers? Surely, there are a lot of solar generators on the market, but we focus on two wonderful models in this article.

As you see in the title, they are Goal Zero’s award-winning Yeti 1400 Lithium and Renogy’s much-touted Lycan Powerbox. Basically, these machines are just portable power stations. But they turn out to be cool solar generators once coupled with the compatible solar chargers.

Therefore, we have taken solar generator kits of both the models for our comparison. That is you get both the power stations along with the compatible solar chargers. More clearly, Yeti 1400 and Lycan Powerbox come in their own bundles of 100W suitcase solar panels.

So you don’t need to buy anything extra to set up a full solar power system in your RV, trailer, or camper. Just unbox the product and set it up in a way you could produce solar energy anywhere.

Thanks to the brand name of Goal Zero, it is certainly one of the most popular models of its kind. As its name suggests, it is a highly powerful 1425Whr capacity machine that could deliver an output of 1500W continuously and a surge power of 3000W.

Absolutely, it becomes a perfect solar generator kit for RV, trailers, and campers mainly because it is such a popular and well-reviewed model. Compared to Renogy’s Lycan Powerbox, this Goal Zero machine indeed enjoys many advantages.

Yeti 1400 works on a lithium battery. Goal Zero realized it as a flagship model of its new line of the lithium solar power stations. As put it above, Yeti 1400 like all its siblings is only a power station if used alone. It becomes a solar generator only when you buy it with a solar charger.

Here we have it in a kit of Goal Zero, which packs up its most popular Boulder 100 Briefcase solar charger. That is, you get a suitcase-style solar charger that you can fold down for easy moving.

Renogy Lycan PowerBox is a new model in the portable solar market. Though Renogy is a notable player in portable solar solutions, it launched a full-fledged solar power station just recently.

In fact, Renogy introduced Lycan through a crowdfunding project on Indiegogo back in 2016. And it managed to attract a huge sum of $128,197 from around 140 backers, but Renogy brought it into the public market after a while. Below we have a pic of the machine along with a link to buy it. 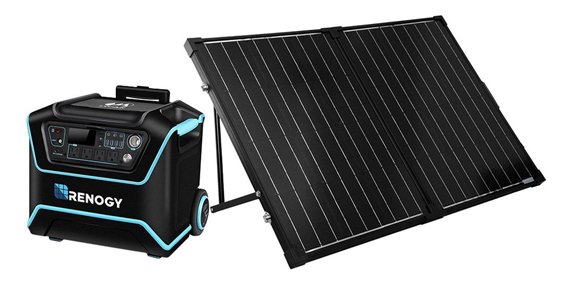 Though a perfect solar generator kit for RV and trailers, the Lycan is no way as much as powerful as the above Goal Zero. The powerhouse packs only a 24Ah lithium battery that could deliver 1075Whr of power, which is quite less when compared to the Yeti model.

However, it has a cool design and some other portability features that make it a serious competitor. Moreover, you could buy the device in a kit of a 100W solar suitcase charger from Renogy.

Below we take a detailed look at the features and specs of the power stations specifically. Of course, that will help you quickly identify the major differences between the machines and make a decision on finding the best one.

Already we explored the power and output data of the power stations above. But for the sake of this comparison, we take a look at those details again. Yes, Goal Zero’s award-winning Yeti 1400 comes with a 1500W pure sine wave inverter that could offer an output up to 3000W at the surge.

These are the two most important factors an outdoor freak will primarily look for a solar generator kit for RV and trailers. It should be a well-designed and highly portable device in a way it becomes ideally perfect for your outdoor trips.

Most of the time, you will love to use a solar generator kit in your RV without permanently linking to the vehicle’s wiring. Thus, you can pull out the solar generator from your vehicle to use for other portable purposes in an outdoor location.

Anyway, we have both the powerhouses with a stylish and portable design. It looks that Renogy has copied some design cues of the Yeti series to vigorously take on the competitions.

Whatever, the power stations share the basic common features like wheels and collapsible handles. When it comes to the exact size, the Lycan is more bulky and hefty, though. It has a size of 14.6 x 13.8 x 13.8 in and weight of 65 pounds.

Both the power stations have a variety of output ports to help you connect different devices. Let us check out the machines separately. First, we have Lycan Powerbox with four AC sockets, as many USB ports, and three DC outlets.

Notably, Lycan has an AC and DC button to allow easy switching between the modes. At the same time, Yeti 1400 has two AC sockets, four USBs, two DC ports, and one 12V Anderson Power Pole port. Overall, both the machines highlight all the important output ports to power up your devices.

Winner: Tie – Both Have All Must-have Output Ports

Each solar generator kit for RV on our comparison is complete with the included solar chargers. The solar charger Yeti 1400 packs is a unit of Goal Zero’s reputed Boulder 100 Briefcase. As put it above, it is an outstanding product that you can fold down after use and convert into a suitcase-style form.

Renogy has also bundled up almost an identical suitcase solar charger for Lycan. However, Boulder 100 is the lightweight one with just around 25 pounds, while Renogy solar suitcase weighs around 30 pounds. But the latter one is more handy with its small size.

Winner: Tie – Both the Solar Chargers Have Almost the Same Attributes

That has been our effort to identify the best solar generator kit for RV and trailers. Hope you have enjoyed it. We think Goal Zero’s Yeti 1400 looks to be the best choice. It is a more powerful and lightweight device and is not way too pricier than its Renogy competitor.

As of writing this, there is only a gap of around $100 in terms of price. So for an extra $100, you get a more awesome solar generator kit for RV if you go for the Goal Zero. Anyway, it is now up to you to decide on what model is the best for your needs. Hope you make your comments below.