We have two lovely mid-range solar-based power stations here. They are from two leading brands; Suaoki and Goal Zero. Well, the models are Suaoki G1000 and Goal Zero Yeti 1000 Lithium.

Of course, they are highly reliable mid-range solar power stations. Here we would like to pit them against one another for a detailed Suaoki G1000 Vs Goal Zero Yeti 1000 comparison.

Of course, you might be familiar with both the machines. We covered each of them in detail before on our blog. Here is an attempt to weigh their specs and features to find the best of the duo. Certainly, Goal Zero has an edge with its brand value, but Suaoki has been doing quite fine for a while in the industry.

As you see, both the Suaoki and Goal Zero products technically fall into the middle segment of solar power stations. Though Yeti 1000 has two higher variants namely Yeti 1400 and Yeti 3000, Suaoki G1000 is the top-ender.  Anyway, both machines share a lot of similarities in terms of power and performance.

Indeed, they are not quite handy and portable. But they could provide enough power to support a range of electronics including AC appliances. The ideal way to make them suitable for portable use is to carry them in your RV, trailer, camper, or boat along with suitable solar chargers.

First, in our Suaoki G1000 Vs Goal Zero Yeti 1000 comparison, we would like to dig into the Suaoki. This is actually a 1182.72Wh mega-capacity power station with a 369600mAh @ 3.2V lithium battery. Well, that makes it capable of storing sufficient power to run your devices during a long blackout or on camping.

The included battery has a life cycle of 2000 times. That is how you could rely on it much for uninterrupted portable power. Well, it is clearly immune to blackouts. And so, you could use it to take on an emergency at home or to back up power for a camping or any off-grid event. Check out its latest price on the link below.

The Suaoki machine has a 1000-watt pure sine wave inverter as its name suggests. It could peak at 2000 watts. And you have it equipped with four standard AC outlets to power a variety of your AC appliances. Yes, you could use the power station to keep four laptops powered at the same time.

Suaoki doesn’t recommend a specific solar charger for it. With a suitable adapter, any solar charger works with it. But we would like to introduce you to a 100-watt folding solar charger from Suaoki itself. That is a highly efficient mono solar panel with four layers and built-in kickstands for neatly placing it somewhere.

Thanks to the included 10-in-1 adapter set, it is compatible with the portable power stations from all key brands. They include Goal Zero, Jackery, Enkeeo, Paxcess, and Rockpals other than Suaoki. Plus, with the built-in USB ports including one QC 3.0, you could use it to charge all your USB devices directly.

The charger features a built-in TIR-C and MPPT charge controller for a safe and stable flow of the current. Meanwhile, making it handy for use, it has got a TPE rubber handle, which will help you take it anywhere after the use. The bracket kickstand helps you place the solar charger at an angle of 45° to the ground.

By the way, the Suaoki solar charger is also very much durable. Made with the PET, it could endure rough outdoor conditions easily. You could just rug it up to your camping tent, RV, or even a nearby tree branch to keep the power station or other devices charged right under the sunlight.

Yeti 1000 features a long-lasting and powerful lithium battery. Thanks to its multiple charging points, you could use it to run up to seven devices at the same time. Well, you could rely on it much to power up your phones, tablets, cameras, CPAPs, power tools, and more. Check out the link below to order a unit of it.

By the way, the Yeti machine has got a more powerful inverter. That is a 1500W pure sine wave unit with a surge capacity of 3000 watts. But it has only dual AC sockets. Yes, you could draw more power, but it could only run two AC appliances at the same time.

When it comes to other charging options, Yeti features four regular USB sockets, three 12V DC outlets, and one Anderson Power port. It doesn’t have a USB-C port. It has a size of 15.31 x 10.12 x 9.29 in and a weight of 40 lbs. That means, the device is rather lightweight and compact compared to its Suaoki competitor.

Boulder is actually a line of traditional metal-and-glass PV panels. Though foldable, Boulder is not a fabric-based semi-flexible panel like the above Suaoki charger. Anyway, the 100W Boulder 100 Briefcase is the fine choice for Yeti 1000. As it is the name suggests, it is foldable like a suitcase for easy moving.

Goal Zero has made use of highly efficient mono solar cells to make it. So, you get an increased output to recharge Yeti 1000 under the sun. While in the use, you could place it at an ideal angle to utilize the most out of the sunlight. Check out the link below for its latest price. 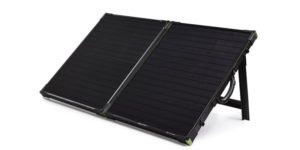 The Boulder panel is made with rigid and anodized aluminum and other quality materials. You could take it anywhere on your trips and have access to the unlimited solar power to recharge Yeti 1000 Lithium.

You don’t need any charge controller or additional cables. Just connect it to the power station and it would start recharging it quickly. By the way, Goal Zero also offers other variants of Boulder, including a 200-watt variant of the briefcase model for charging at a rather faster pace.

It is really tough to identify a winner of the Suaoki G1000 Vs Goal Zero Yeti 1000 comparison. We have two very competitive devices with nearly the same specs and features. Coming to the storage capacity, Suaoki G1000 has an edge over its Goal Zero rival. It has a 1182.72Wh ultra-high capacity battery pack.

It is when Yeti 1000 is more powerful with a 1500W inverter. The Suaoki has a 1000W inverter with surge power of 2000 watts, but it features as many as four AC sockets. So, you could connect more electronics at the same time. Moreover, the Suaoki has got two Quick Charge USB ports and one USB-C as well.

Yeti has all the four USB ports the regular 2.4A units. Meanwhile, when it comes to size and weight, Yeti is a clear winner. It is rather smaller and lighter than its Suaoki rival. So, if you are looking for a rather handy power station, Yeti is the best choice. Meanwhile, if you want to store more power, the Suaoki is good.

That has been our take on the Suaoki G1000 Vs Goal Zero Yeti 1000 comparison. We have tried our best to get through all the features and specialties of the devices. Of course, both the power stations share several common things in capacity and features. So, if you are looking for a reliable off-grid power back-up system, any of the duos will work nicely, for sure. Share your thoughts about the product in the comments.